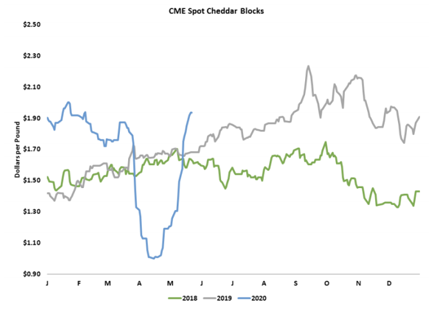 The spot cheese markets continued their breathtaking climb. They have scaled great heights at spectacular speed. This week spot Cheddar blocks jumped another 15.75ȼ to $1.9375 per pound. Barrels rallied 17ȼ to $1.89, a new 2020 high. Since the month began, blocks have gained a mind-boggling 73ȼ and barrels have added 70ȼ. Milk powder is perking up too. CME spot nonfat dry milk (NDM) climbed 7.75ȼ this week to $1.0125, its first foray above a dollar in nearly two months. The other spot markets retreated. Butter dropped 5.25ȼ to $1.5925. Still, spot butter is 39.5ȼ higher than it was when the month began. Whey powder slipped 2.75ȼ this week to 36.25ȼ.

Helped by improving sentiment surrounding milk powder, Class IV futures trudged higher. Most contracts gained about 20ȼ this week. Despite the sizeable rebound from the depressing values reported in April, Class IV remains well below the cost of milk production. 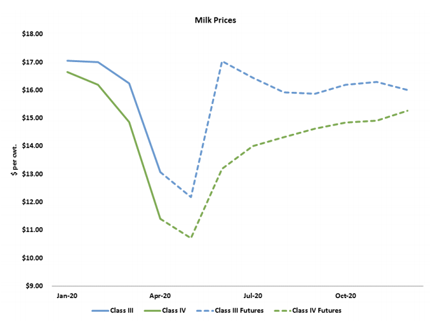 After making great gains in the two preceding weeks, Class III futures found it difficult to keep climbing. Most Class III futures retreated this week, and the August contract lost more than a dollar. The market clearly believes that spot cheese may have climbed too far, too fast. June was the exception. June Class III added another 18ȼ and reached $17.03 per cwt. That marks the highest print on the board, with later months trading between $15.88 and $16.44.

The inverted futures curve highlights that the fresh cheese shortage is likely temporary. At the moment, companies that promised to supply food banks are shopping for huge volumes of dairy products, and restaurants are restocking their larders. Once 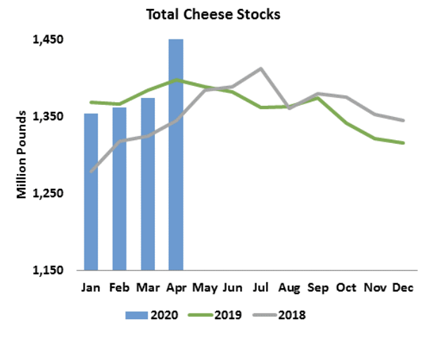 those needs are satisfied, there will likely be more than enough cheese to go around. But immediate demand must be formidable if we have managed to tighten up fresh cheese inventories so quickly after piling up cheese in immense volumes last month. As of April 30, there were 1.48 billion pounds of cheese in cold storage warehouses, the highest total ever. Stocks increased 108 million pounds from March to April, the highest month-to-month increase in more than a century of USDA records.

Butter stocks were formidable too. They totaled 368.7 million pounds, up 26.8% from a year ago. Manufacturers struggled mightily to churn their way out of an ocean of butterfat in April. With cream selling for a fraction of the butter price, every churn in the nation was making product and stocks swelled. Now, ice cream output is heating up and restaurants are loading their coolers with fat-laden ingredients. Discretionary butter churning has slowed and the price has risen accordingly. 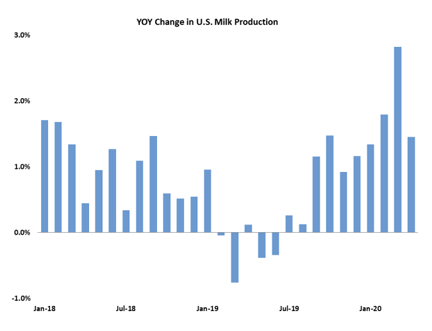 At the Global Dairy Trade (GDT) auction, skim milk powder (SMP) gained 6.7% and reached the equivalent of NDM at $1.23 per pound. Most other products moved lower at the GDT. In Europe, SMP and butter values are bouncing back, but Cheddar continues to fade. Manufacturers are taking advantage of the government’s Private Storage Aid program to put some product away for the summer at a subsidized cost. The market will have to contend with these inventories later this year, but so far the volumes are modest.

U.S. milk output – including dumped milk – totaled 18.7 billion pounds in April, up 1.4% from the prior year. USDA revised upward its estimate of March milk production by a significant 0.6%, putting March milk output up 2.8% from last year, the steepest year-over-year increase since December 2014. No wonder we were drowning in milk. April’s more modest increase highlights dairy producers’ efforts, both voluntarily and forced, to reduce milk supplies. With overproduction penalties still in place and May milk prices excruciatingly low, growth in May milk output is likely to be tepid. 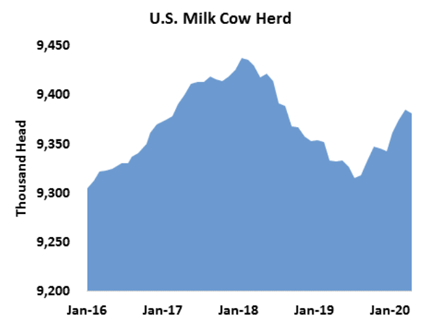 U.S. dairy producers culled hard in April, slaughtering 279,400 head, the highest total for the month since 1986. These numbers clearly reflect immense pain on the farm. The dairy herd contracted by 4,000 head in April, to 9.381 million milk cows. Still, that is 49,000 more than in April 2019 and likely more than we need in such a sluggish economy

Dairy producers have been drowning in red ink, and USDA has rushed to offer a lifeline. Beginning May 26, the agency invites dairy producers to sign up for direct payments to offset losses for Covid-19. Producers will be compensated $6.20/cwt. for first-quarter milk production, with 80% of the money up front and the remaining 20%, or a portion of it, to come later if USDA’s funding can cover all the requests. Payments will be capped at $250,000 per individual, or $750,000 for a partnership with at least three active members. That’s enough to cover recent losses on smaller dairies, but for large dairy producers, it doesn’t come close. According to research from the Agricultural and Food Policy Center at Texas A&M, on a 1,000-cow dairy, $250,000 would be equal to roughly $4.12 per cwt., a far cry from the $6.20 for their peers with fewer cows. On

a 2,500-cow dairy, $250,000 is equivalent to just $1.65 per cwt. More than half of U.S. milk is made on farms with more than 1,000 cows, so the caps will disappoint much of the industry. Still the aid is generous and likely to arrive swiftly, which will likely improve dairy producers’ strained relationships with their lenders. There may be an unwelcome side effect, however. The combination of a cash windfall and surprisingly high Class III futures may slow contraction in the dairy herd, to the detriment of prices later this year and into 2021.

It was another quiet week in the feed markets. Corn slipped 1.25ȼ to $3.18 per bushel. Soybeans lost about a nickel, falling to $8.3325. Although there are a few trouble spots, most of the Corn Belt has been blessed with an open planting window, plenty of rain, and, finally, warmer temperatures. Corn for ethanol demand is rebounding along with gasoline consumption, but feed demand is likely slipping as livestock growers try to slow production.