Ten-Year Anniversary of Genomic Evaluations in the U.S.

This year marks the 10 year anniversary of the release of genomic evaluations in the dairy industry.  In recognition of the ground-breaking work by USDA scientists to deliver genomic technology to the industry, a workshop was held during the 2019 American Dairy Science Association (ADSA) Annual Meeting.  This workshop also provided a scientific forum for assessing the current status of genomic evaluations and the on-going progress towards improving their predictive value.

When measured as rates of industry adoption and genetic progress, genomic evaluations have been a visible success for the dairy industry.  Since the initial release in 2009, improvements to genomic evaluations have helped bolster confidence and acceptance across the industry in the U.S. and around the world.  Today young sires are used extensively and genomic information on females is used for farm decision-making including insemination, culling, IVF, and embryo transfer decisions.  Recently researchers estimated that rates of genetic improvement in the U.S. dairy population increased over pre-genomic era rates by ~50 to 100% for yield traits and from 3X to 4X for traits such as Daughter Pregnancy Rate (DPR) and Productive Life (PL).  Genetic trends of Holstein and Jersey sires and cows for Protein Yield and Net Merit Dollars (NM$) demonstrate the impact of this technology for two genetically different types of measures. 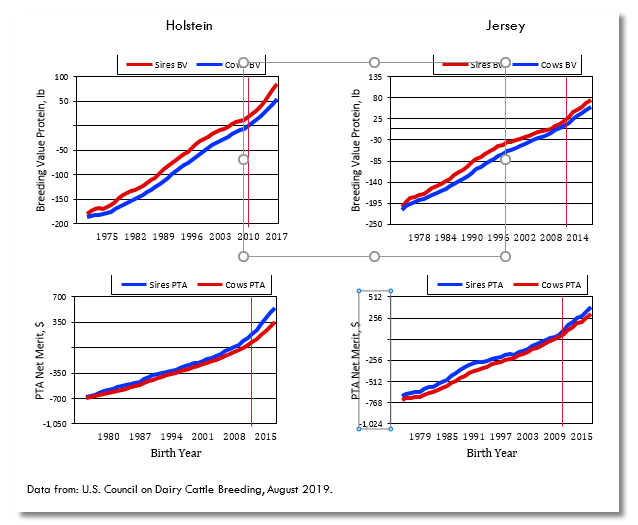 Significant improvements during these past ten years to the accuracy, reliability, and usability of genomic evaluations mean that current gPTAs (genomic Predicted Transmitting Abilities) of young animals better predict each animal’s true genetic merit.  In the U.S. industry these improvements have been driven by two primary initiatives:  1) expanding the size and scope of reference populations and 2) reducing the impact of bias.

Reducing Impacts from Bias and Other Unintended Factors

Capturing additional improvements in the predictability of gPTAs for young animals has required researchers to reduce the impact of bias.  Bias, which has elements specific to the genomic era and others that are long-standing, can impact PTAs and gPTAs by inflating or shrinking genetic and genomic estimates.  Bias may result when selected groups of animals are treated differently and we are unable mathematically to eliminate the effect of this preferential treatment.  Although preferential treatment can be intentional, in many cases it is driven by common sense economic decisions facing dairies.

Frequently cited examples of preferential treatment include providing different conditions for genetically elite dams versus commercial cows or treating daughters of selected sires differently.  A less obvious form of preferential treatment is when genetically superior bulls are genotyped, but bulls that have lower genetic rankings are not.  In addition, some statistical models can shrink or inflate inappropriately the true differences among animals.  Minimizing and ultimately eliminating the impact of bias and similar effects is important to ensure that comparisons of potential sires and dams across different ages, herd management, regions of the country, availability of phenotypic records, etc. are equitable.

Research findings during the early days of the genomic era indicated that gPTAs of young bulls were inflated significantly over their true genetic values.  In the intervening time since these early studies considerable effort has been put towards identifying sources of inflation for young bull gPTAs and correcting these.  In his presentation during the 2019 ADSA workshop, Dr. Paul VanRaden highlighted measures developed and implemented by USDA that were aimed at reducing impacts of bias on U.S. genomic evaluations and gPTAs.

The graph illustrates overall trends for Net Merit Dollars (NM$) of bulls since the start of genomic evaluations.  Broken lines represent the average initial NM$ for bulls with no progeny (red) and for early first crop progeny test bulls (blue).  Solid lines represent the subsequent average NM$ for these same groups of bulls as high REL daughter-proven sires.  Of course, our goal is for early genomic results to predict final or true genetic value with no systematic difference.  In this hypothetical unbiased scenario solid lines would overlay the broken lines.  On the other hand, in findings reported by Dr. VanRaden there are visible differences between broken and solid lines of the same color, indicating that there have been system-wide differences between bulls’ average initial and final proofs. 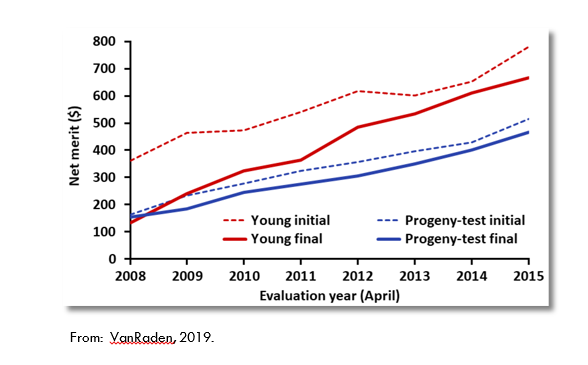 For progeny test bulls (blue), the small and relatively consistent gap or difference between the broken and solid lines indicates a slight overestimation by early first-crop daughter proofs of bulls’ final NM$ that did not shrink or get larger (worsen) as we advanced and improved genomic evaluations.  During this same timeframe, the scenario for young bulls with no progeny tells a bit of a different story.

For young bulls, overestimation was extremely large in the first few years after the release of genomic evaluations when overestimation alone averaged ~$200 NM$.  Over time by expanding the genomic reference population and implementing strategies to lessen effects of bias, the “initial” and “final” lines have converged indicating that inflation of young bull gPTAs and NM$ has been reduced significantly.  Findings from two separate studies conducted by 1) USDA and 2) a cooperating team including scientists from the University of Georgia, Holstein USA, and USDA confirm the relatively good predictability of current gPTAs and REL in the U.S. for males and females.  However, it is important to point out that researchers for the second study warn that monitoring and research must continue, because some residual bias continues impacting gPTAs for the youngest bulls and new sources of potential bias are growing in importance.

This first ten years of genomic evaluations have delivered to the U.S. dairy industry extremely effective and ever-improving genomic tools for farm decision-making including sire selection, insemination, culling, IVF, and embryo transfer decisions.  During the next ten years of the technology, we need to expand our investments in genotyping and DNA sequencing, R&D, and collecting performance data including data for new traits such as feed intake, metabolic indicators, detailed milk composition, calf health, etc., to reap the rewards of improved and new next-gen tools for on-farm decision making.

The first ten years of using genomic technology in the U.S. have delivered tools such as low-cost, high reliability genotyping for decision making, and led to dramatic increases in rates of genetic progress (up to 3X to 4X over pre-genomic rates).

In the U.S., current genomic evaluation results have benefitted greatly from extensive expansion of reference populations and the implementation of a series of strategies targeted at reducing the impacts of bias.

In 2019, genomic evaluations in the U.S. deliver very reliable information for bulls and heifers early in the animal’s life.

We need to expand investments in R&D and data, genomic and phenotypic, to reap the rewards of improved and new next-gen genomic decision tools.

Editor’s note: Dr. Marj Faust is a founder and principal of Agri Innova LLC and Data Driven Genetics, where she and her team partner with established and emerging organizations as well as farming businesses globally to build strategy and deliver innovation. She was an R&D executive at ABS Global and Genus plc, served on the faculty at Iowa State University, provided consulting services in regulatory sciences to Novartis/Syngenta Seeds and FASS, and has held leadership posts in several dairy organizations. Readers may contact her with questions or suggestions at marj.faust@datadrivengenetics.com.

Genetic evaluations for crossbred animals are now available. Our columnist Marj Faust, a genetics consultant based in Madison, Wisconsin, talks with Joel Hastings of DairyBusiness about this new opportunity for dairymen with cattle that have [Read More …]

Long gone are the days when animal breeding could be labeled primarily an “Art.” This phenomenon called “Science” has gnawed away at that perception across time. Historically in dairy genetic improvement, most gains have been [Read More …]

The Council on Dairy Cattle Breeding (CDCB) team is working full speed ahead to ensure continuity so that none of our services, including U.S. genetic evaluations, will be impacted by COVID-19 or related measures. We expect [Read More …]