Bear Grylls has remarked that “life is an adventure that is best lived boldly.”  As a former British Special Forces serviceman, a well-known TV adventurer, a survival expert and an accomplished author, Grylls is clearly embracing his own advice.  He took the stage at ONE: The Alltech Ideas Conference (ONE19) to outline the four things that have forged him in the success he is today. 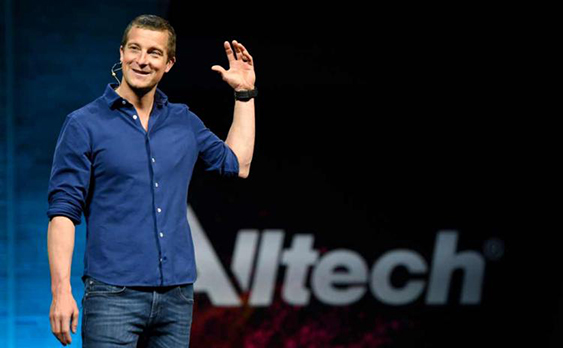 Grylls noted that failure was likely the more important force behind his accomplishments, revealing that the first time he attempted to become a member of the elite Special Air Service (SAS), he failed and was sent back to his unit.  At the time, he thought not making it meant he wasn’t fast enough, smart enough or simply good enough, but nevertheless he decided to try again.  Grylls remarked that he felt completely out of place among the huge, muscle-bound soldiers also attempting to join the SAS unit, and he began to worry he’d volunteered for something that was beyond his capabilities.  He soon realized, however, that SAS selection was bout both physical capacity and mental resilience and that, although he might be average in stature, he was mighty in spirit.

“My failures far outweigh my successes,” said Grylls.  “The failed expeditions, projects and near-death moments still haunt me in the night sometimes.”

Grylls went on to say that it was actually these failures that eventually helped him to grow stronger, both inside and out.  “There’s no shortcut to avoid failure,” he said.  “Failure is a doorway to success.”

The second pillar Grylls addressed was fear, noting that “life is scary sometimes, and all of us face battles, even if [they’re just] battles of confidence and nerves.”  He added that it’s a universal truth that life will test us, no matter who we are.

“Life doesn’t always just reward the brilliant or the talented,” he said. “life doesn’t really care about the exam results or good looks or the letters after someone’s name.  Life rewards the dogged, the determined – those who can walk toward their goals despite their fears.”

When it comes to facing fears, Grylls speaks from experience.  In 1996, at the age of 21, his celebrity – and life as he knew it – was almost impeded when a skydiving adventure went terribly wrong.  After jumping out of a plane with a few friends over Zimbabwe his parachute became tangled and failed to inflate properly.  Grylls desperately tried to remedy the problem  by pulling on his steering toggles, but to no avail.  He was descending so rapidly that, by the time he realized what terrible trouble he was in he was too close to the ground to use his reserve chute.  He ended up plunging toward the earth in a freefall landing on his reserve parachute pack and breaking his back in three places.

Though his spinal cord was very nearly severed, it remained intact.  He spent the next year as an invalid, undergoing grueling rehabilitation and enduring night terrors about falling and being out of control.  Still, he remained unfailingly determined and a mere 18 months later, Grylls accomplished a lifelong dream by becoming the youngest British person ever to reach the summit of Mt. Everest.

“You might wonder if I’ve ever jumped again,” he said.  “And the answer is:  all the time.”

While he admitted that he dreads jumping, Grylls also said that he knows the answer to fear is to face it head on.

“Life has repeatedly shown that, when we edge toward our fears, they often melt away,” he said.  “I really struggle with rooms full of strangers.  I think this is because I know I’m not actually as strong as people might expect, but that’s okay because we all have our stuff – fears are just part of life, part of what makes us real and relatable.

“In life, those cracks we all have are really our stories: like wrinkles, each one is a story, an adventure,” Grylls continued.  “The big moments in all our lives really leave marks and, if I’m being honest, I’m completely covered in marks.”

When outlining how we can keep moving forward against the odds, Grylls said that it comes down to learning how to access our inner fire.

“You must first understand that no one is really brilliant or brave all of the time,” he argued, recalling an encouraging quote from one of his commanding officers in the military.  “When not one ounce of you thinks you can, you’re the one that turns around and gives that little bit extra.”

“If you dig, you will find it,” he added.  “the fire is always there.  Sometimes in life, the fire gets a little hidden;  in fact, sometimes it’s just a little ember – but it’s always there, and it can change everything.”

In the course of his trek up Mount Everest, Grylls said, the mountain claimed four people’s lives; two died from exposure and the others fell to their demise. They’d been climbing for more than 55 days in negative 40-degree temperatures, with the peak of the mountain looming above. Grylls was completely exhausted and felt that every step forward was followed by a backward slide.  He was no longer sure he could reach the summit, and he admits there was a voice in his head that kept telling him, “You don’t belong here.  Give up.”  However, instead of  slowly bowing to that voice as he was initially inclined to do, Grylls found his inner fire and kept going.

“This fire has been my most valuable weapon – not talent, not skills,” he said.  “Know the power of unrelenting, unwavering resilience.  The storms of life, ironically, make use strong.  As with all dark nights, sometimes you’ve just got to hang in there, doggedly.  The dawn will always come.  The light will always win.”

While on Mount Everest, Grylls also found the voice of doubt in his head being silenced and drowned out by a stronger one, one that was difficult to describe but that said, “I’m with you.  Lean on me. You can do this.” This was when he realized that faith on oneself and in others is the universal force of goodness.

“We all face our mountain,” said Grylls.  “Everest really is just a state of mind.”

Achieving your dreams, Grylls continued, will mean embracing your failures along the way.

“I’m no hero, and I’m no stranger to crippling doubt and fear, but I know the weapons that serve me best,” he said. “They come from within, not without.”

In closing, Grylls argued that the final element to success is about finding true wealth, which stems from being both grateful and kind.

“I’ve climbed mountains look at me men who have lost their legs in war, but yet, they still smile and are grateful – [they say] look at all we have and all we’ve done,” said Grylls, who added that we must seek humility and understand our place in the universe.

“Our real wealth is always going to be found in our relationships,” Grylls continued.  “It’s about the simple things that keep us moving through the dark nights that we all face from time to time.”

Grylls’ final remarks served as a simple note of inspiration:  “Remember, you are made amazing.  Stand tall, and never give up.”

This article appeared in the June issue of Alltech Feeding Times and is used here with permission.

Fiscalini Cheese Thanks Alltech for Video: Powered By Poop

Thank you, Alltech for the great video on Brian and how they are using methane digesters to turn waste into electricity. See the video above. Editors note: If you haven’t seen this video, please watch! [Read More …]