Prior to the April genetic evaluations, model changes were announced for both calving ease and stillbirth. These changes considerably improved the accuracy of the traits and improved the stability of the evaluations. A base change was applied for the calving traits as well; however, while PTAs for most traits decreased due to the base change, PTAs for the calving traits went up.

If we are making slow-but-steady genetic progress, why do you see higher PTAs for calving ease on your favorite bull? In fact, there are probably bulls that you have used frequently with no issues that have high PTAs for Sire Calving Ease (SCE). Why?

The simple answer is: Our current PTA values do not match with the incidence levels of calving difficulty and stillbirth in the population. We understand why you may be confused!

So, what happened? The good news is that we are making favorable genetic progress. U.S. Holsteins and Brown Swiss today do not experience the high rates of difficult calvings like they did in the past. While we have reduced the incidence of difficult calvings and stillbirth of our national population, we have not properly adjusted calving traits at the previous five-year base changes. Because of this, the average PTAs of animals have remained constant, making it appear that little progress was made (Figure 1).

This article will explain how we got here, and a follow-up article this summer will explain upcoming changes to address the phenotypic base.

The history of calving ease and stillbirth as national traits

To understand how we got here, we need to go back to when calving ease and stillbirth were introduced as national traits. In 1980, calving difficulty in the Holstein breed had gotten to the point that only 86% of male calves were born without assistance. At the time, 14% of all Holstein bull calves needed assistance at birth and were classified as ‘born with difficulty.’ Calving ease is a complex trait, with both cow and calf playing a genetic and environmental role. Biologically, parturition is a collaboration between dam and offspring that requires a precise sequence of physiological events. Due to the complex nature of the birth process, any observed difficulty can result from a large variety of factors. Genetic aspects of the trait are therefore difficult to ‘capture’ or estimate, and the heritability is low. When a trait has a low heritability, genetic improvement takes longer. However, improvements in calving ease from genetic selection are cumulative and permanent.

From 1980 to 2000, very little genetic progress was made for calving ease. Incidence levels for difficult births in 2000 were as high as 11% for bull calves born – only a 3% reduction from 20 years prior. 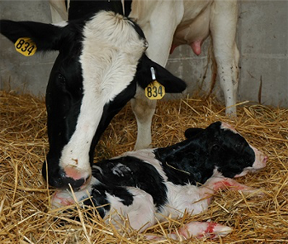 To increase the genetic progress toward calving ease, the trait was included in Net Merit $ in 2003. At the subsequent genetic base change, in 2005, the genetic base for SCE was set to the average PTA of bulls born in 2000 (then 8.0%). Stillbirth was introduced as a national trait in 2006 and followed the genetic average base of 8.0% for both Sire Stillbirth (SSB) and Daughter Stillbirth (DSB), matching the incidence levels of stillborn calves at that time. While the genetic base for most traits is set at zero, the average of calving ease and stillbirth was kept equal to the incidence level of the base population. That way, the PTAs would never be negative which made sense as the traits are expressed in percentages. A PTA would either be below or above the set average.

In the next two subsequent base changes, in 2010 and 2014, the genetic base for both calving ease and stillbirth was kept steady at 8%. Keeping the bases constant kept a larger proportion of the animals at a higher PTA level. As a higher PTA is unfavorable for both calving traits, this strategy incentivized the use of sires at the bottom scale of the PTA and accelerated genetic progress toward easy calvings.

How calving traits are calculated and expressed

The calving traits are represented by two main traits: calving ease and stillbirth. Calving ease provides a measure of the amount of assistance given at calving, which is assumed to be correlated to the ease of calving. PTAs are expressed as the percent of difficult births to heifers because dystocia is most frequent in first-calf animals. Stillbirth is defined as calf mortality at birth or within 48 hours after birth. PTAs for stillbirth are expressed as the percent of stillbirths to all cows. These traits are correlated. Greater calving difficulty is associated with higher risk of stillbirth, but the current models treat these as separate traits.

Both calving ease and stillbirth are scored on categorical scales. Calving ease is scored on a scale from 1 to 5, while stillbirth is either 1 (alive at 48 hours after birth) or 2 (born dead or died within 48 hours). This is distinctly different from traits such as milk yield, which follow a continuous scale where all numeric values are technically possible. While it is practical to score the calving traits in categories, it does not mean that this is biologically true. Not all calvings scored a ‘3’ will be the same. Some will have more or less assistance than others because different observers may assign slightly different scores to the same events. Biologically, calving ease follows a continuous scale, but we cannot measure it using a standardized measurement as with pounds of milk. Instead, we use statistics to transform the calving ease scores recorded on farms to an underlying continuous scale (termed a “liability scale”). Genetic evaluations are computed on this underlying scale, and then converted back to the so-called observed scale (the percentage of difficult births and percentage of stillbirths) for publication. We do this because a value of 0.65 on the underlying scale does not have a simple interpretation, but a PTA for SCE of 4.5 has a clear meaning. Because we are working with two different scales, there are also two different bases: the genetic base on the underlying scale and average value on the observed scale.

So, what happened with the base change? The group of bulls used to set the genetic base on the underlying scale has been changing every five years, as it does for the other traits. However, the observed-scale base was kept constant. Animals rank the same way relative to each other on both scales, but the PTAs were forced to

have the same average over time regardless of genetic progress. This means the published PTAs no longer

match what happens in the maternity pen and, combined with the new edits, actually led to an increase in PTAs! If

genetics work, this can’t be true. The PTAs have therefore always been correct and accurate. The bulls with higher values have offspring that experience more calving difficulty and stillbirth. The way the PTAs are expressed needs to be updated.

This additional attention for the calving traits worked and faster genetic progress was made from 2000 onwards. Between 2004 and 2010, incidence levels of difficult calvings dropped by 3%. In 2010, genetic progress was accelerated by the entrance of genomic selection, and by 2014 (two base changes since 2005) incidence levels of male bull calves born from first parity heifers were reduced to approximately 5%. Further genetic progress in conjunction with the heavy use of sexed semen in recent years has led us to where we are today. In the past 16 years, the industry has greatly reduced both difficult calvings and the prevalence of stillbirth, an accomplishment of substantial economic value to dairy producers.

Because the average of the PTAs for SCE and DCE were kept at a steady 8.0%, a noticeable gap has now grown between the observed calvings on farms and the PTA values of sires. The expression of the trait as percent of difficulty/stillbirth implies an incidence level that used to line up with the actual incidence of observed calvings but does not today. In other words, a bull with a PTA for SCE of 8% does not have 8% of calving difficulty among his offspring born from heifers. The true incidence level among the offspring of this bull will be considerably lower.

Where do we go from here? 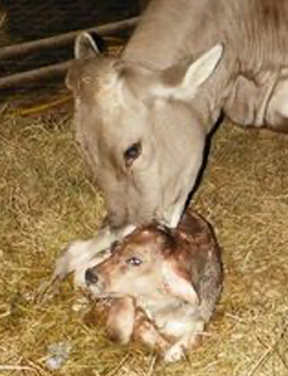 The calving ease and stillbirth traits need a change in how the PTAs are expressed. The PTAs need to align with the observed incidence levels in the population so that values can be interpreted correctly. While this article mainly focused on U.S. Holsteins, the same update must also be made for Brown Swiss. How the traits should be changed will require multiple discussions among industry groups. It is expected that the traits will be updated in the next official genetic evaluation in August 2020.

Because the 8% average for SCE has been a staple for the past 16 years, it can be difficult to look past this artificial threshold. It is important to know that this value does not reflect a true level of incidence. The improvement in both calving traits has been of such magnitude that breeding programs should not be afraid to use bulls with PTA values higher than 8% when other selection traits are favorable. While the Council on Dairy Cattle Breeding will calculate current incidence levels and updated PTAs, also consider the experience in your own herd with these sires. If a bull works well in your herd, then you are safe to trust these observations and continue using the bull even if his PTA is now higher. If you are using Net Merit $ as your selection criterion, you will continue to choose the best bulls for your cows.

Values will be adjusted in August 2020, and follow-up communications will explain the trait adjustments.

The four millionth genotype was recorded on March 2 in the CDCB database – an incredible feat possible through collaboration between the U.S. and Canada and among dairy producers, genotyping labs, nominating organizations, international partners, [Read More …]

A new milestone was met on December 13, 2018, when the three millionth genotype was uploaded to the national cooperator database managed by CDCB. Approximately 700,000 new genotypes were added to the national database in 2018. Most of the growth in genomic services involved [Read More …]

A planned maintenance is scheduled between 1pm on Tuesday, February 4th and Thursday, February 6th (EOD). During this time, the current CDCB production server will be replaced for a new, more powerful, machine. During this 2-day [Read More …]